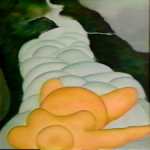 Excerpt from Labor Pains of the New Humanity

"Many of you are familiar with writings, set forth by this physiological channel, regarding a condition known as "Global Acceleration Syndrome."   This term is not a medical diagnosis, per se.  Rather, it is an instrument of identification, that can be applied to your life, when no medical diagnosis (or treatment) seems to help you with your "symptoms." At that point, you begin to realize something.  You're pregnant.  You're pregnant with the NEW YOU.  And, even though there may be medicines and treatments to help your pregnancy go smoother, which one of you expects to be "cured?"  You aren't really sick. You are with Child.

The transformation from planetary human to Earth Mother is not limited in experience according to gender. All of you have both male and female energy within you.  All of you are capable of being pregnant with the rest of who you are!  Accept it, and move on--or deny it, and falter.  The choice is yours.

Here are a few of the main signs of Physical Transmutation, when they appear in someone who cannot be relieved through ordinary medical means:

Your first step of Reconnection has been to acknowledge everything and everyone as an aspect of yourself.  Mentally, if not emotionally as well, you have done this.  Those who haven't done it will need to begin doing it now.  After that, you begin to connect to the concept that your body has become correspondent to the Planetary Body.  "As above, so below" has many expanded meanings, as you are about to discover!  To go through this, you must begin to expand your concept of yourself beyond the first-person level, and begin to identify with all levels. The Earth is not just something that you live upon.  It is now becoming something you are.  Do you understand this?  Is so, please continue.  If not, contact the Reconnections Office for assistance in this regard."

Copyright, 2001, by Daniel Jacob.  All Rights Reserved.  May be copied and shared, for purposes of personal growth and/or research, so long as the above URL and this copyright are also included in their entirety.  All reproduction for profit requires the written permission of Reconnections, Inc.