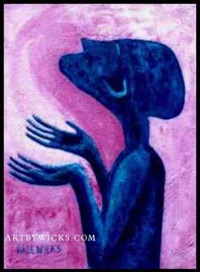 "Letting Go,  Into the Flow"

It is a time of great turmoil and agitation.  The world is beginning to turn into that for which we have been preparing you.  Your time of deliverance is at hand.  However, that "deliverance" is not found in some "Savior" or Messiah," who comes forward to lead you out of slavery.  Instead, it is made manifest in your own personal birthing of a Oneself Planetary Being---a Magical Child of vast and indescribable power, who embodies and employs all those hidden resources and abilities that you have been storing up for just such an occasion.

It has been said:  "Too many cooks spoil the stew."  And this is what will seem to be happening for awhile.  The "bully pulpit" of established leadership is slowly giving way to a "round table" of collaboration and communal joy.  It may not seem like it now, but you will see.  Those who appear to hold the power at this time do not.  And those who appear helpless and vulnerable are not as impotent as they might seem.  In many ways, the world you see now is a mirror reflection of what it is becoming.  As with all reflections--it appears BACKWARDS from its true state.

So many facets of life are crying out for definition and order. Yet slowly, steadily, your New World Order is being taken away.  In its place, FREEDOM is beginning to reign.  As with all its previous appearances across time, the advent of Universal Freedom is only visible to those who truly desire it---and most especially, to those who are willing to grant it to everyone and everything else as well.

The reciprocal nature of Freedom is crucial to its discovery and acquisition.  To gain one's own freedom at another's expense is to miss the point.  That is why so many "Ascended Masters" are back at this time---bargaining with the Devil to free more and more of humanity.  How can they move on, when so many aspects of themselves remain here, languishing in flames of unsatisfied desire?

The Cornerstone of Civilization is not "might makes right."  To capture and control is NOT what being "civilized" means.  The essence of civilization is "love your neighbor as yourself."  Does that make you your brother's keeper?  Not at all.  To become his "keeper" would not be taking things far enough, though it be the very height of arrogance.  In truth, you ARE your brother.  And he is YOU.  And the reflections and refractions that knowledge brings to the Universal Jewel are sufficient to fill and fulfill your hearts for all eternity.

The Advent of Universal Freedom is not the "right" thing to happen now.  It is simply the NEXT thing.  You are not overthrowing definition to gain ambiguity.  One is not better than the other.  They are simply different, that's all.  You've thoroughly explored one side of the equation, now you get to take on the other---following your Soul's Evolution to its next destination--the next "station" on the Multiversal Line.  That's what you WANT, isn't it?  Well, all right, then........reach out and take it.

Let go.  Release the captives.  Open the Gates.  You don't have to "go" anywhere to be free.  Just start acting differently, right where you are.  Act AUTHENTICALLY, rather than COMFORMING to what you (or others) think you should be.  Let your insides and your outsides match.

Behind every so-called "responsibility" or "obligation" you carry, there is a hidden contract, a secret pact that says : "Don't leave me."

Balderdash.  Things come and things go.  People do the same.  You breathe in, you breathe out.  Life is about CHANGE.  Why, then, do you wish to capture it, to seal it in a jar?

Let go.  Let others go.  You don't need "a new lease on life."  You need to rent, month-to-month, day to day!  Ownership is not all that it's cracked up to be, is it?  What you own ends up owning you.  You have to water it, dust it, feed it, and clean up after it.  In most cases, you have to pay taxes on it as well. Don't you have better things to do with your time and money?

The FLOW, as we call it, is a CURRENT of life that is moving all around you.  Have you heard of the term "current events?"  They are things that happen in the Flow. Where will you be when the tide turns?  Will you be riding it, or will you be crushed beneath it, drowned because you tried to get in its way?

There are Inner Flows and Outer Flows.  The things you see "outside" yourself constitute what you are resisting.  If your attention is drawn out there, you are resisting something.  Pay attention, as much as you need to pay, and then you get to call those things "home."  You stop resisting.  You simply FLOW.

What part of the world constitutes your "body?"  It is anything or anyone you PUT ON, which separates you from The Flow.  A body is not a bad thing.  It was created to be an educational tool.  It is a like a sign that is printed on that Directory at a Supermall, which says:  "You are Here."   But friends........why be HERE, when you can be EVERYWHERE?

Buddha had it right, sitting under that tree.  There is nowhere to go but HERE. There is no other time but NOW.  And there is no one else but "I Am."

But in the middle of all that, you are still HERE.  So be here.  Let go, into the Flow.  Your Persona and your perceived universe are points of resonance, designed to re-unite the estranged mind and emotions that have previously characterized your existence here in 3D.  The more you move outside of "resonance" the colder things become.  Please allow us to explain.

When your brain registers a thought, it is very similar to a cook who serves food at the dinner table.  He (or she) presents the food, and those seated at the table either gobble it up, or it just sits there and gets cold.  The mind is like that.  You can think a thing, but if you don't chew it up and swallow, that idea grows cold and dies.  At least, it dies here.  In its own universe, it still remains very much alive.

The same is true with feelings.  Something happens, and it absolutely makes you BURN with emotion.  You yell and curse, or you laugh and sing, expressing loudly the visceral reactions attached to that current event.  Then what do you do?  Do you return to "normal" and carry on with life?  Very good.  You've experienced a feeling, and nothing more.

True progress (and process) in life is dependent upon RESONANCE.  The mind thinks and the gut feels.  If they concur, and move into FLOW together.......DESIRE is formed..........and your WILL prepares to function.

Internal/External........it's all quite a pain, isn't it?  Well........yes and no.  If you're IN THE FLOW, and you've LET GO...........you are quite content to feel desire and act on it, knowing full well that there are forces in your world that could quash your desire before it gets off the ground--leaving you broken and lonely.

In many ways, a Resonant Desire that comes from within a singular person is like a THOUGHT or a FEELING that is presented from the micro to the macro¹ world.  The analogy would be the same as above.  It is either embraced and gobbled up, or it is rejected and left to cool on the dinner table. So what?  Back to the drawing board.  That's life.  But if you refuse to become resonant within, for fear of being "rejected" without, you have ceased to live.

When a person takes action or gives expression in the physical world, it is like a person who stands on the edge of a canyon and shouts to someone on the other side.  He yells "Hellooooooooo........" and then he waits.  If there is no answer, he shrugs and goes his way.  Or, perhaps, after a time, he hears "Hellooooooo" in return.  A point of Resonance has been formed with the physical world.   It's all YOU, both the Inner and the Outer World.  It's just YOU at different levels of consciousness.

A Resonant Soul, moving within a Resonant World is a Reconnected Being.........a MIRACLE.  Everyone else is a work in progress.  The process can take as little or as much time as you would like to give to it.  When you are done deliberating, you will LET GO.  The word "de-liberate" speaks about a curtailing of freedom, does it not?  Once you're done deliberating, as a race, Freedom is all that is left to you.

The solution (or resolution) to your current problems is waiting for you to LET GO.  The tides are busy, flowing all around you.  Why not include yourself in that Resonant Flow?  Let its reflected energy take you where it may.  Or, be content with yourself if you choose to stop and hang on awhile. It's all good.  It's all real. There are no mistakes.......just opportunities for learning and experience.

At your core, you are a merely a viewpoint......a raw nerve......ready for stimulation....nothing more.  Nothing LESS, either.  Everything that gathers around that nerve, that wandering "I" is just furniture.  Let it go.  Let them all go.  Things will come, things will go........but the "I" continues on......(the same "I" that observed the formation of this world)..........watching, studying, experiencing Ourself, in every way possible.  Forever.

¹Microcosm to Macrocosm:  The smaller to the larger.  A smaller version of the same expanded concept.  "As below, so above."  Holographic Essence.