Another Transmission from The Reconnections.......

Among the most remarkable transformations that are occurring in these latter days are those incidents where individuals switch viewpoints with the Oneself for a moment in time. Visualizing what life looks like when seen from the God/Goddess Perspective is definitely an important part of your return to Oneness. But when that vision fades, and you are returned again again to the mindset of a mortal, the effects can sometimes be a bit traumatic. There are those who have referred to this shift as "Falling out of Heaven." If a person doesn't measure his energy just right, he can sustain the equivalent of a "cosmic whiplash."

This phenomena is a primary component behind many of the physical maladies you are experiencing at this time. When your consciousness accepts this grand challenge and *hits the mark,* the result is a feeling of transcendence and an attainment of powerful insight. When you fail, slipping into a pothole of arrogance or fear, your energy systems may crash---leaving you feeling depressed, fatigued, and filled with despair. If the fall is a significant one, mental circuits can be fried, and the memory of the exercise will be temporarily lost to you. At such times, a person will actually believe that his sudden depression just come "out of the blue."  But really, its often the result of a very ambitious maneuver in consciousness that was designed to prepare you for the transformations that are ahead. 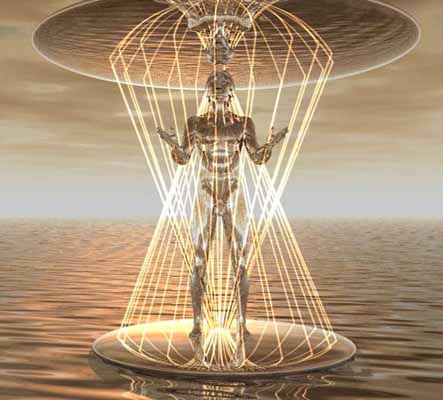 A VISION FROM ON HIGH

Hidden deep within your consciousness is a kind of "toggle switch" that allows your viewpoint to expand and contract between the human self and the Expanded Self. We refer to this process as "Phase Shifting." You might compare it with the "zoom" feature on a camera lens. The basic difference is that you can only, at this time, access the Expanded Perspective by "nodding out" from your human consciousness and transferring to the Divine One. Once there, it is relatively easy to slide down the spectrum and perceive as a human again.  In the days to come, you will have attained enough velocity in your energy to slide upwards too. However, that option is currently being held back until the planet reaches a more stable point in its evolution.

To attain the divine perspective, a human must overlook certain borderlines that separate his field of perception. In the beginning, many of these "breakthroughs" develop as a result of emotional or physical trauma. Some have also replicated it through the use of certain drugs. When a person begins to "journey" in this way, he may even think of the experience as a "fluke," and disbelieve the strange sensations that accompany it. Only repetition and focus will allow each of you to gain a sense of security as you exercise these new powers. 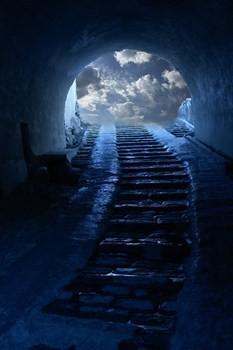 In other transmissions, we have spoken at length about a Reconnections style of speaking and writing called "The Oneself, We"---a multidimensional way of speaking that helps your consciousness integrate itself with the rest of All That Is. Now we will tighten the focus a bit, and speak to you about "The Oneself, Me," a way of seeing and experiencing yourself as One with All.

To achieve this, you must learn to stop thinking of yourself as LACKING anything, or in need of ADDING anything in order to make yourself complete.   Everything is already there.  It always was and always will be. Your "past lives," and your "future lives" are all connected to you---like appendages are connected to a physical body. The reason you have lost track of them is that you have become so absorbed with your current life context that you can't really see anything else. In a sense, you have developed a kind of TUNNEL VISION. When you "die" (in earthly terms), you are simply moving OUT OF THE TUNNEL.

The Reconnection will be your replacement for death. Instead of falling over, leaving your body, and going in search of a new one---you will learn to expand your current definition of "body" so it can encompass everything and everyone around you. You will learn to see your fragmented existence as simply a piece of the Greater You---a mini-drama that has captured your attention for a time, made you stare into it, and kept you amused. Gradually, one "stare" leads to another, and you slowly and steadily climb the "stares" back to the top floor of your Multidimensional High Rise.

One illusion that will go quickly, as you expand your focus, is the idea that human desires and wants have anything to do with WHO YOU ARE in the greater sense. In truth, those motivations have more to do with WHO YOU THINK YOU AREN'T.  We speak more specifically about this in our transmission concerning The Causal Plane. As humans move through each physical existence, it is hard for them to realize that their passions, needs, and concerns actually originate from resistance issues that exist within their Expanded Self. In a sense, each human life is a "witness" that steps forward to inform the Expanded Self that....... "Yes.........you also have this in You as well!"

To become physical, a fragment of energy has to decelerate its vibration from a condition of liquid light to a denser manifestation of physical flesh.  It has been said, in your English language, that something which is considered important or of interest is something that MATTERS to you.  It represents something you care about, or need to study in more detail.

With the assistance of the Veil of Forgetfulness, the human ego forgets about the bigger picture and allows its self-concept to be limited to the confines of a single body of flesh. It becames invested in traversing the world through that smaller body, and wrestling with "forces" that seemed to oppose its desires and needs. When the ego is successful in conquering its "opposing forces," it feels happy. When it fails, the ego is sad.

[Before continuing, let us pause for a moment to point out an important shift that has just taken place in this conversation. Do you notice that we are referring to your ego as though it were someone (or something) else?  In a sense, we have temporarily *detached you* from confinement within that structure and taken you out upon the "ledge" of your reality to peek in through a "window."  Instead of being who you were when you began reading this article, we have taken you into the center of The Reconnections so we can speak to you *privately* about yourself.]

For a Form Ego to be happy, he must move directly into the center of all those ideas that he has been RESISTING in his more Expanded Self.  He must walk awhile in his "enemy's shoes." Another way of saying that would be: To make the little you smile, the Big You has to cry a few tears and wrestle with some of his demons. Do you comprehend what we are saying? And if you answer yes, is it any wonder that your ego encounters obstacles and resistance when he reaches for what he feels are his dreams? After all, at the more Expanded Level, the attainment of his "dreams" in physical life are the equivalent of  NIGHTMARES to his Multiversal Self.

But all of this is HIDDEN, do you see? That's why they call this kind of wisdom "occult knowledge." The word "occult" means "hidden." And the hesitancies and resistance of your Expanded Self are kept deep inside, lest they become too apparent and stop the Game before it has begun.

Do you, within your ego self, love and cherish art? It is probably because the concept of "art" plays a very important part in the RESISTANCE PATTERNS which are being processed at the level of your Oversoul. Do you fear relationships?  It is probably because your Oversoul (your amalgamated concurrent selves) have big issues about relationships. And you are here, as their "representative," to work all of those issues through.

When an Ego Entity prays to God for "help" with his fears, or success in his endeavors, he is totally oblivious to the kind of UPHEAVAL that the granting of his wishes might cause. That is because the God/Goddess also have THEIR issues to process---and, in fact, are doing so through the physical incarnations of humans on the Earth.

It all connects, doesn't it? As well it should! Take the time to acknowledge and accept that. And when a person speaks about "God," "Goddess," or "Universal Spirit," it is important to remember that there are Lords many and Gods many. Each one represents a holy aspect of the Oneself who plays a "role" in the personal universes of so many. All hierarchies are conceptual constructs of those who have created them. They are designed to accomplish specific goals in learning for all concerned. However, they are also limiting, and eventually fall away as each person moves closer to the Oneness, where all distinctions merge back into the Greater Whole.

Copyright, 2007, by Daniel Jacob.  All Rights Reserved.  May be copied and shared, for purposes of personal growth and/or research, so long as the above URL and this copyright are included.  All reproduction for profit, by any means, requires the written permission of Reconnections, Inc.