The Politics of Oneness.....

Barack Obama is very astute when he contends that the REAL ISSUES of this current U.S. Presidential Campaign are not being discussed.  Yet he is naive if he contends that RACE isn't at the heart of things. It very much is.

The "race issue" we will be speaking about here is not a continuation of the ongoing strife which exists between blacks and whites.  That is incidental.  What we are speaking about is a NEW "RACE".............a NEW "BREED" of HUMAN that is about to step forward onto the world stage.

In our transmission Neo-Shamans of the New Millennium, we spoke about this NEW BREED in some detail.  At one point, we described them as nothing less than the BEST of what has come before.  And the reason Barack Obama is experiencing such a rise in personal power and influence right now stems from the fact that he (consciously or unconsciously) is displaying a number of NEW BREED Characteristics.

For example........everyone is asking the question:  "Will Obama be the first black President?"  Our answer to that question is "No."  Why do we say that?  Because Obama is not black.  He is HYBRID.  His father was black and his mother was white.  Technically, he could pull cards from EITHER SIDE of the "deck," if you care to use that analogy.  And THAT, My Dear Friends is what has BOTH SIDES worried. 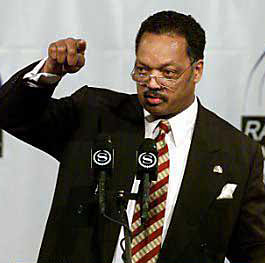 If Obama was simply "black," and truly stood a chance of being the "First Black President," would his own Minister stand up and try to steal the limelight from him?  A Minister who is obviously committed (almost militarily so) to "black" issues in America?  Would a lifelong campaigner for equality such as Jesse Jackson be mumbling that he would like to "cut that guy's nuts off"......if Barack Obama was destined to be the first BLACK President?  Not on your life.  And what about those Hillary supporters who are threatening to vote for McCain, now that Hillary isn't going to be the first Woman President?  Does THAT make any sense, either?  It does, if you take into account the FEAR that is felt by ALL PARTS of a highly-polarized society when a HYBRID ENERGY enters the picture.

The Republicans are astute when they say that Obama is an "unknown commodity."  That's the way HYBRIDS are.  They put integration above polarization........in ALL things.  Is Obama that kind of hybrid?  That remains to be seen.  Bill Clinton enjoyed a notable surge of power, back in the 90s, because he began taking MODERATE POSITIONS on key issues if it meant he could achieve certain goals that were important to his agenda.  This, too, is a NEW BREED characteristic....though Clinton's exercise of power was tripped up by personal vices and political mine fields that were laid out to keep him from moving ahead faster than America was ready to go.

In his articles entitled "The Razor's Edge," our physical channel discusses New Breed Societal Principles more in detail.   We will also be speaking about these issues as Fall approaches.

At present, it remains unclear whether Obama has what it takes to pivot America (and the World) into New Paradigm Living.  And even if he does, is this polarized world ready to follow him?   Only the Shadow knows.  More to come on this.