I awoke this morning (October 9), with a feeling that our recent trip to Glastonbury had really opened up a "can of worms" in regards to my connections to the World of Magic(k), and Wiccan Ritual, and a number of other things.

We began our Conclave in Glastonbury with a ritual invocation of the local energies, performed in the Meadow at the base of the Tor.  During that ritual, we called in the directions, and we invited all 6 of the other "Star Islands of Avalon" to reunite (7 altogether)........so that we could drink in that energy, and the local "flavor" during our journey there.

It now feels as though we were like the "Sorcerer's Apprentice" in that ceremony......invoking Earth Energies...which seem to keep coming, and coming, and coming!   You might describe the whole thing as a grand "March of Awareness".......especially in regards to the Elementals and Earth Spirits, who seem quite interested in communing with us at this time.

I have realized that this "flu" we all have is a somatic clearing, of sorts.......and it forces us all to slow down and look inwardly, so that these Earth Connections can be established more permanently.  When I first awoke, I thought I had actually pissed off some of those Natural Elements, through the invocation of same in Glastonbury (for a time), only to return to my Urban American Jungle.  I thought:  "Oh God, this flu is a curse or something."  Then, I smiled.  That level of processing is old hat.  We're part of the ONESELF now, and the beings we encounter on this journey are simply passionate....... like big Sheep Dogs...........greeting their "humans" with such fervor and excitement, that they can literally knock us over as we approach them!

The above picture was sent to me by a reader who lives in Sweden.  She found it during one of her own research times, as she was studying the concept of "Faces in Nature"........to gain some background on some Spirit Encounters of her own, which began back in September.  That prompted me to take another look at this whole area of Elementals, Cloud Ships, Geomancy, and so many other areas of study.

The three-fold Star Gate Openings seem to take on new meaning now.  I've been given that a "Star Gate" is a connection between some point on Earth on some point in the Heavens.  The opening of this portal can either exist between Earth and some Planet or Star System, or it can also signify a new connection with some Archetype or Figure of Divinity.  The Guides have long emphasized that the "stars on the ceiling," which are those heavenly clusters that appear above us, are actually figures of Gods, Goddesses, and other Spiritual Powers that are looking in on us as we live out our lives in physical Form.

The Star Gate Opening at Avalon (Glastonbury) symbolizes our ascent into THE TOWER, which has long been a symbol of Spiritual Wisdom and Perspective.

In the Tarot, this symbol has many meanings.  In the Rider Deck, it is a picture of a lightning bolt, hitting what looks like a lighthouse.  Although there are many who see this as negative fate, or destruction.......it can also symbolize the arrival of INSIGHT (a "bolt out of the blue") or some life-altering event.  One writer on the subject even compared the image with the hitting of the Twin Towers, by those airplanes, on September 11.  That was truly "life altering" for all of us, was it not?

At our Conclave, we made continual reference to a "life altering event" (to use one member's phrase), which comes upon us suddenly, in a moment of time, and leaves us changed forever.  One member, upon returning from the Conclave, described herself as being "in an altered state, after the most Earth-Shaking Experience she has ever had (on more levels than she wants to think about)."  I, too, had a similar feeling.  Something marvelous happened to us up there, and our "illnesses" keep us from leaping right back into the fray, in physical space.  It is as though we wish to hold onto things just a little longer.

I remember that night on the Tor (see "Reconnection at Avalon") when Angel and I climbed up those stairs to the sound of Jimi Hendrix's voice, singing "All along the watchtower, the princess kept the view"..........

To be sure, a Star Gate Opening to THE TOWER is a stairway to heaven.  It is "Jacob's Ladder," if you will! And I have a permanent image in my mind of what heaven is like, sitting up there and looking over that landscape.

Tricia's Star Gate Vision at Giza was of the Pyramid and Sphinx Opening Up, revealing a whole storehouse of resources and symbols--which she felt is our invitation to revisit the Ancient Mystery School Records there, in order to receive upgraded views of that material, compatible with our planet's current energetic accelerations.  It has provoked us to begin revisiting our own memories concerning Atlantis and Lemuria, especially the Societal Templates which may be useful in the formation of the New Humanity, following the Earth Changes that are upon us now.  More will be revealed as we prepare for our Reconnections Spring Conclave in Sedona, Arizona next year.  More info on that to come.

The symbol of a PYRAMID speaks clearly of Ascension to me.......since it is a gathering of the various "sides" in certain reality contexts--gathering them up...into a singular point of UNITY, which can become an Ascension Chamber for the person or persons who are ready to take a journey.

The Guides speak to us about Bridge Concepts, which are considered Ascension Chambers as well.  I felt this strongly, in 1994, when I stood inside the Tomb at Newgrange, in Ireland.  I closed my eyes, and immediately felt myself being drawn upward.  Later, in a private channeling, Belteshazzar explained to us that there are many such Earth Portals, which serve this purpose.  Among them, of course, are these Pyramids.

As additional visualization for that.......I only need to remember the actual movie "Star Gate" and the emphasis placed on Pyramids in that story.

This newest insight, about Faces in Nature.......and the power of relating to Elementals.....is the third gift of this September 20 Event.   The Easter Islands, with their many stone faces, are truly symbols of this.  So is the great face above, which opens this article.

This field of study is called "Geomancy," among other things.  And it is used strongly in the practice of Feng Shui, the ancient art of placement--in regards to auspicious room arrangements and the organization of land and property.  I sense that even more will come of this, as I answer the call of the Fae to begin working and walking in Nature--a result, no doubt, of that excellent "Essence of Fairie" elixir that was sent to me recently by Takara, from "Spirit of Nature" Essences.  Even though we had to postpone our introductory workshop with Aine, at Celtic Fire and Fairie---the Fae did not wait to make fresh contact with me!  More will come from this, I am sure.  More to come on this......definitely!     10/9/05 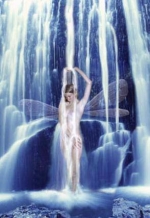 Copyright, 2005, by Daniel Jacob.  All Rights Reserved.  May be copied and shared, for purposes of personal growth and/or research, so long as the above URL and this copyright are also included in their entirety.  All reproduction for profit requires the written permission of Reconnections, Inc.